What is fair housing? If you had asked me this question a few months ago, I would’ve guessed it meant nondiscriminatory housing based on race, nationality, or sex. However, thanks to my internship at the Bloomington Housing Authority, I’ve realized that it is much more layered and intricate than that, as it should be.

So, what exactly is fair housing?

Fair housing is the right of all people to be free from discrimination in the rental, sale, or financing of housing. Fair housing means equal access and equal opportunity to housing, and includes a wide range of protected classes.

In fact, the Federal Fair Housing Act of 1968 prohibits discrimination in public and private housing based on race, color, national origin, religion, sex (gender), disability (mental or physical), and familial status. I was surprised that religion and familial status were included in the protected classes — I cannot imagine why anyone would choose to discriminate against different religions in a multicultural country, or how the presence or lack of children could lead to housing discrimination.

The act covers almost every housing-related transaction, such as renting the property, the terms and conditions of a rental or sale, mortgage lending, appraisals, and insurance, as well as advertising the property.

As a marketing intern, I focused on the implications of fair housing in advertising. I was baffled when I looked at examples of advertisements that were considered discriminatory, as some of them did not have malicious intent, but ended up inconspicuously excluding certain groups of people. For example, stating that the property has an “adult community” would discriminate against families with children, and saying that the property is a “Catholic” home without a nondiscriminatory religious statement would be considered discrimination. However, I found it interesting that stating a preference for gender was not considered discriminatory, as in looking for a roommate of the same gender. Ultimately, in advertising, it is important to focus on describing the qualities of the property rather than the “desired” qualities of the residents. 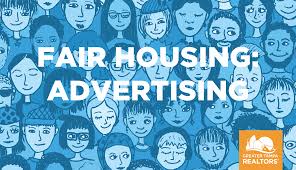 My initial inability to understand how some advertisements were discriminatory made me realize how easy it is to overlook certain protected classes and their situations, and how crucial fair housing is. America’s housing history is plagued by discriminatory policies, ranging from the creation of seemingly harmless yet shockingly homogenous suburbia to the infamous redlining policy, where neighborhoods with minority residents were marked in red for “high risk” for mortgage lenders, to the blatant gentrification of neighborhoods. Discrimination was once worse but continues to affect many protected classes to this day. Therefore, fair housing is vital. 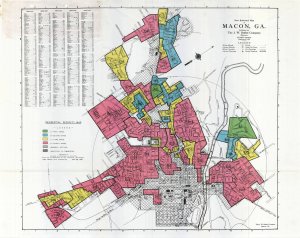 At Bloomington Housing Authority, I learned about the multiple efforts that were focused on increasing accessibility to housing to a broader market, such as the Affirmative Fair Housing Marketing Plan (AFHMP) that aims to increase outreach to people least likely to apply to housing. At BHA, the ethnic group least likely to apply were Hispanics, for which we’ve begun translating our advertisements into Spanish in order to increase engagement. I’ve also been collecting and analyzing data from applicants for housing this year, in order to track demographic trends and find more groups that may need more outreach to apply.

In addition, I’ve also created an advocacy page on the BHA website, to provide resources that may help people deal with and understand poverty and discrimination, especially in housing.

While we have a lot to accomplish in order to have zero discrimination in housing, many housing authorities across the country are trying various initiatives to be more inclusive and accessible.